Our First Taste of Vietnam

After being in transit for thirty straight hours we arrive in Vietnam’s northern capital city of Hanoi. Our first glimpses of the city were collected under heavy, but eager eyelids. The sheer volume of colour, sounds, smells and people were enough to shake the weariness. That, and the hankering for our first bowl of authentic Vietnamese Pho. After quickly ditching our luggage in our modest, but dirt cheap hostel in Hanoi’s Old Quarter we set off on our quest. We made sure not to take many turns since it was still dark and we did not yet have access to maps as our phones did not yet have data.

While we heard from many sources, and know from previous travels in Thailand that street food is the best food, we were in search of something a little safer looking with walls and seats. Our first taste of the sorcery they call Pho was pure magic. There was very little about it that was similar to the Pho we had previously tasted back home in Ottawa. The broth was a dark, rich brown, and the beef in the form of small balls. But similar or not, the taste was a thing of beauty. Unfortunately we devoured it too quickly to get a picture, but we have the name of the place we will share with you, but you must stay tuned until our post on The Quest for the Best Pho. 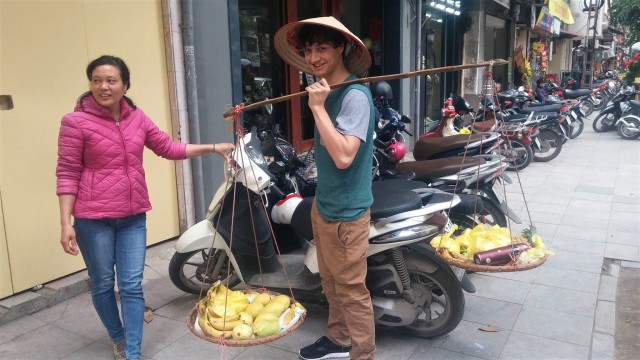 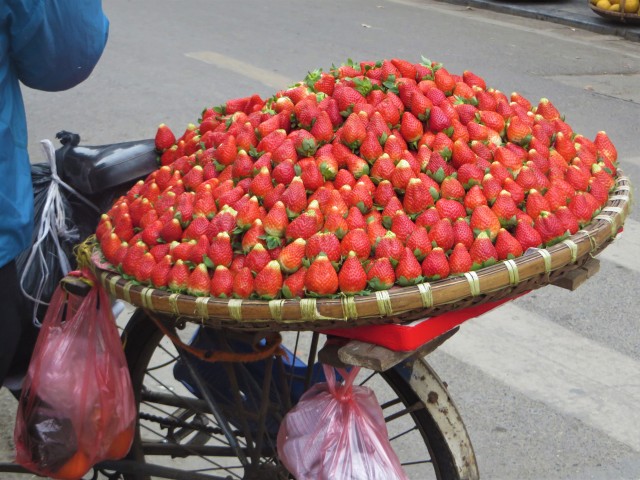 Our first impression of Hanoi was that it was a crazy city with crazy drivers, but some amazing food. And while you often cannot trust a first impression, this one was wholly and completely accurate. So began the adventure of our taste buds in Vietnam’s Hanoi.

On our first day in Hanoi we explored the Old Quarter in search of a day pack and some warmer clothes. As it turns out, Northern Vietnam in January is similar to late Autumn in Canada. We soon found out that the roads are complete anarchy. First off, they are barely wide enough for one car to pass with pedestrians on the side, however two cars are attempting to pass in opposite directions on a road clearly wide enough for only one of them. Meanwhile there are hundreds of motorbikes swerving around them, driving up on the sidewalks and thousands of walkers trying to avoid being run over. But by some miracle we never witnessed even a rear end! it must be a form of organized chaos.

By our third day in Hanoi we were experts at crossing the street, a feat we take for granted in Canada. We learned from the locals of this magical tactic that stops bikes and cars in their tracks! You simply walk into the street and stick your palm out in front of traffic a la the Spice Girls in “Stop Right There.” Works every time, as long as you save it for the really dire situations where there is no foreseeable break in traffic. 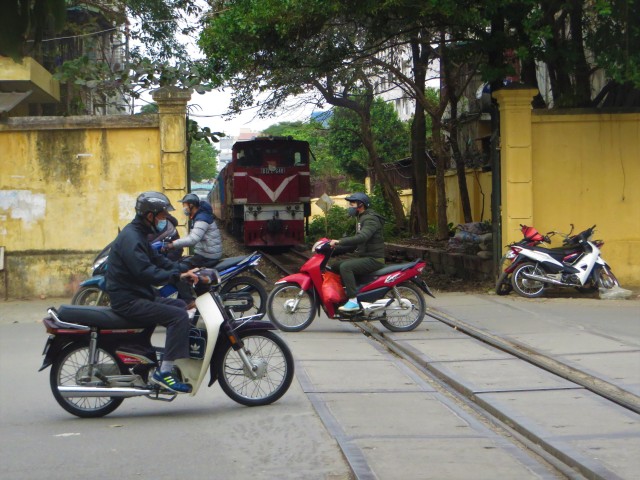 We eventually made it to the infamous “Train Street” on foot, because there is no way either of us were going to attempt to drive in that madness. Walking in it was hard enough. We found the Train Street quite picturesque, but it was lacking in the hustle and bustle that is often associated with train streets. 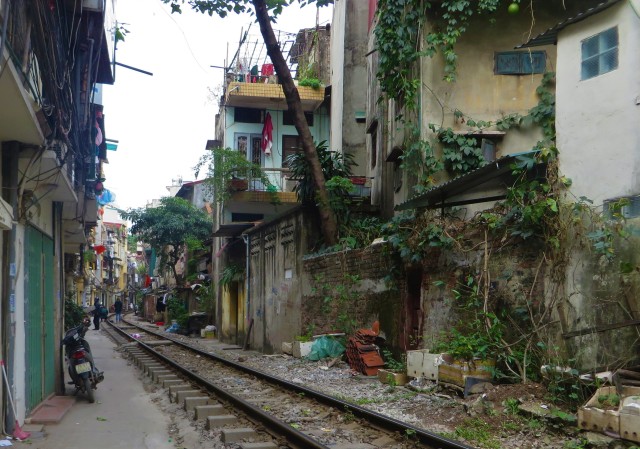 We were expecting the whole hullaballoo of everyone having to clear their stalls and games off the tracks in the event of an oncoming train, but the tracks were completely deserted where we entered. Before and after the train passed by. But we were not complaining. It made it easier for us to walk along them and snap a few pictures. 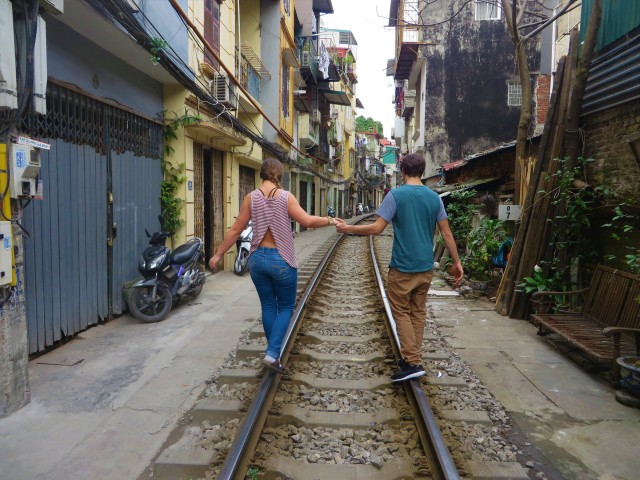 After a day of exploring, our tummies and our feet led us back to the Old Quarter to refuel. We thought we had better expand our food repertoire beyond Pho so we let our nose lead us to this. We chose to call it Hanoi BBQ since this is the first place we tried it and while we found reasonable facsimiles, we could not find the exact same thing anywhere else in Vietnam.

You are given a small grill at your table with an open flame that heats the metal plate, you then douse the plate in butter or some sort of cooking oil and once it has heated you add the raw meat and/ or vegetables and cook it right in front of you. 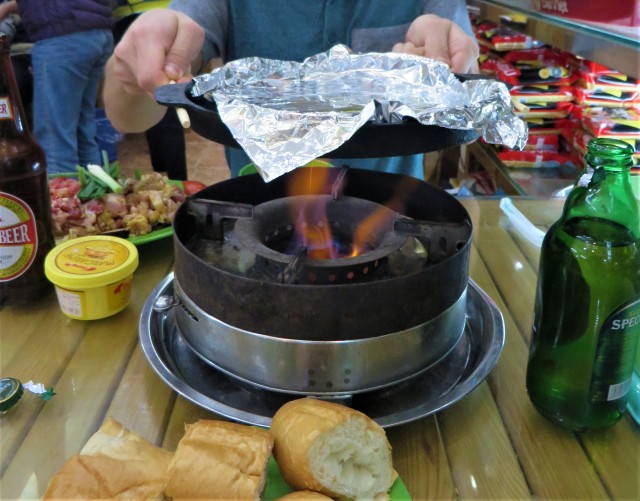 We had different variations with seasoned meat or vegetables, but the first was our favourite where everything came pure and unseasoned. But you are given a bowl with course salt, a lime and hot peppers. We soon learned you squeeze the entire lime into the mixture which becomes your dipping sauce.

We were obviously new to this method of cooking and required extensive assistance from the waitress and the kind Vietnamese woman trying to enjoy her dinner next to us. I guess we were screwing it up so bad she could simply not ignore us. We obviously did not know when to turn down the heat, or that that was even an option as our plate ended up looking like this. A true sign of some BBQ amateurs.

But one taste and we were hooked. We went back the next night only to find the place was closed. So we went to the place next door which had more or less the same thing. But no BBQ could compare to that first one we had. We plan to try to replicate it once we arrive back home in Ottawa. Stay tuned…

Another great spot to check out in Hanoi is Hoan Kiem Lake. The pretty setting in the day cannot really compare to its glory all lit up at night. We took a stroll around the entire small lake and took pictures of the iconic red bridge there. There is a small fee to cross the bridge during the day, while it is closed at night. It is still worth it to gaze at it from afar.

We were lucky to discover that there happened to be a weekend market going on. With so many vendors to see, things to buy, and performers to watch and listen to, one could spend hours walking around the street market. It didn’t hurt that it was an exclusively pedestrian area, so not even motorbikes were permitted. So we could relax a little with the peace of mind of only watching out for fellow pedestrians. 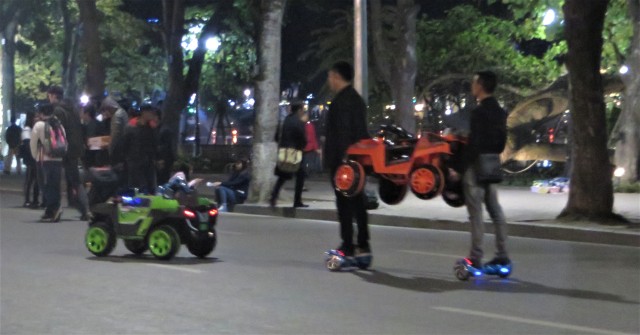 It seems these two found a loophole around the whole “walking street” thing.

Hanoi was also the beginning of a long and passionate love affair with Vietnamese coffee for Cameron, and myself to a lesser, more healthy degree. For those who have not tried it. I am sorry. But real talk, you are all missing out.

The coffee first off, is grown, harvested and roasted in Vietnam. And unlike most coffee consumed worldwide it is a Robusta variety, not Arabica. The coffee is brewed in a little instrument half-way between a single cup drip and a mini French press. The cup of coffee you get is rather small, a traditional cup of 8 oz. or less, but the little cup packs a punch! And to top it all off, they add sweetened condensed milk instead of milk/ cream and sugar. It makes for a rich, robust and sweet coffee that will change your life! 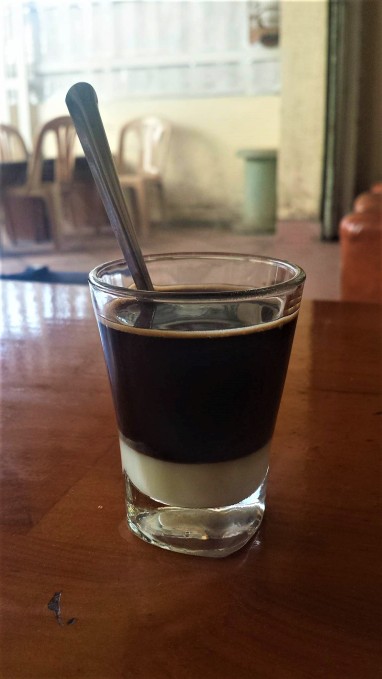 Off the Beaten Path

In our final days in Hanoi we went for an extended walk to explore the city less seen. We knew we had left the tourist areas as the street food became more and more foreign. And we knew we weren’t in Kansas anymore when we encountered for our first time, entire cooked dogs hanging in store fronts and street stalls. Needless to say, we thought we would return to our comfort zone for our next meal.

All in all Hanoi gave us our first taste of the many exciting flavours Vietnam had to offer. Consider our appetites “whetted.”